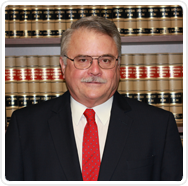 Wayne joined our firm in 1989 and became a partner in 1992. He obtained his law degree at Loyola University in Los Angeles. Before that, he did his undergraduate work at Oberlin College in Ohio and graduate studies at Columbia University and UCLA. While still a student, Wayne helped make ends meet by working in an auto assembly plant, iron foundry, restaurant, and clerical administrative jobs. He was a union activist for many years, including serving as a shop steward and chief shop steward.

Wayne has been selected as a Workers’ Compensation “Super Lawyer” in the Los Angeles Magazine survey of Southern California attorneys every year since the survey began in 2004. He has served as Chair of the Workers’ Compensation Section of the Long Beach Bar. He has spoken frequently on workers’ compensation topics, including at Cal State Dominguez Hills; L.A. Trade Tech; California Applicants’ Attorneys Association training seminars; the Southern California Rehabilitation Exchange; and numerous local union workshops.

Wayne is certified by the State Bar as a Workers’ Compensation Specialist and also is experienced in handling Social Security and disability retirement claims. Wayne’s work has focused on injured safety officers, including representation of a former fire chief for the City of Long Beach, and a former president of Local 1014, Los Angeles County Firefighters. His successes have included important appellate court decisions, including the leading safety officer cancer presumption case, City of Long Beach v. Garcia.

Wayne’s hobbies include rebuilding and maintaining a 35-year-old car and an 80-year-old home. Most years, he and his family disappear for a few weeks for wilderness canoe and camping trips.